Two Separate UFOs Filmed By People On Board Commercial Airplanes

NASA Probe Touches the Sun For First Time In History 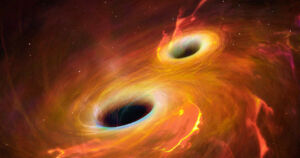 When two black holes — or one black hole and a neutron star — get sucked in to each other, they generate one of the most violent and energetic events in the known universe.

These events called gravitational waves were famously first predicted by Albert Einstein, who suggested that the energy released would be so large they could disrupt the space-time continuum itself.

Since detecting the very first one back in 2015, scientists have been detecting more and more, thanks to an international team of researchers and equipment that’s creating a paradigm in our quest to understand how stars live and die in our universe.

In the latest finding, according to a yet-to-be-peer-reviewed paper spotted by ScienceAlert, the team spotted a whopping 35 of these events between November 2019 and March 2020.

Using the Advanced Laser Interferometer Gravitational Wave Observatory (LIGO) — the world’s biggest gravitational wave observatory, which is actually made up of two observatories over 1,800 miles apart — and Virgo, a smaller instrument located in Italy, the team was able to track down a shocking number of them.

“These discoveries represent a tenfold increase in the number of gravitational waves detected by LIGO and Virgo since they started observing,” said astronomy professor Susan Scott from the Australian National University and co-author of the paper, in a statement.

“We’ve detected 35 events,” she added. “That’s massive! In contrast, we made three detections in our first observing run, which lasted four months in 2015-16.”

Most, 32 to be exact, are suspected to be the result of black holes merging, forming a massive new hole. These newly created supermassive black holes can balloon into gigantic structures clocking in at over 100 times the mass of the Sun.

Some, however, are likely the result of a neutron star, the dead remains of a star, colliding with a black hole.

“The excellent sensitivities of the detectors have allowed for the observation of so many more exciting gravitational wave events, including the first ever confident neutron star-black hole binary detection,” said Madeline Wade, assistant professor at Kenyon College, co-author, in a separate statement.

While we’ve confirmed their existence, neutron stars remain mysterious. We still don’t quite know how small or big they can get, precisely how they’re formed, or exactly what they’re actually made of.

“This really is a new era for gravitational wave detections and the growing population of discoveries is revealing so much information about the life and death of stars throughout the Universe,” Scott added.

The Next Big Thing for RNA? Fixing Moldy Food